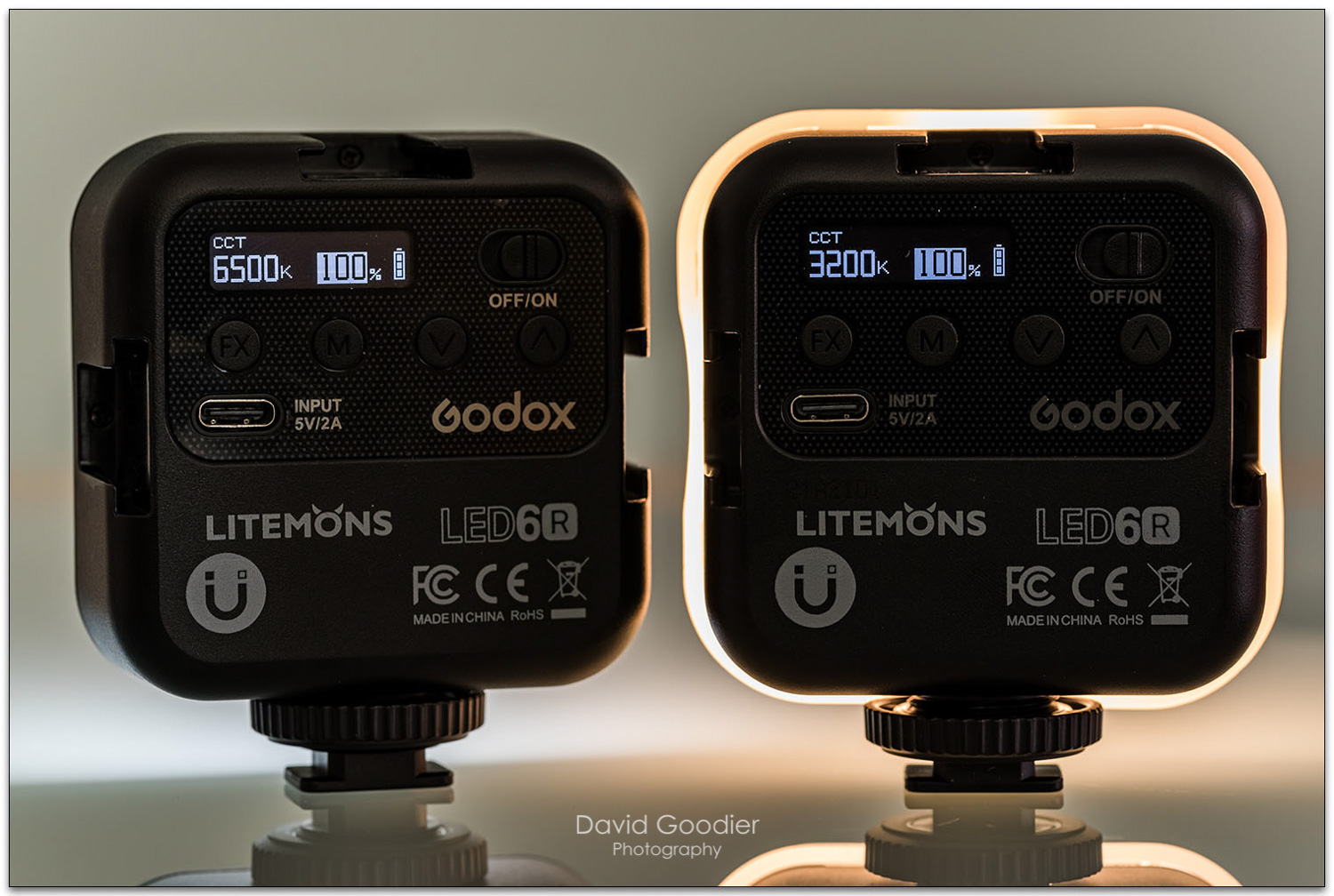 As a Lake District Wedding Photographer I’m always looking for the next great ‘thing’ that’ll help me to create beautiful photos for my couples, whether that’s something HUGELY expensive and BIG, or, as here, pretty cheap & small

So I was immediately taken by the new GODOX LED 6R RGB Video-light as it seemed perfect for my ‘details’ type shots I like to take at the start of shooting most Wedding Preparations (Prep), with shooting things like Jewellery, Wedding shoes, Hair-pieces, and of course the new & expensive present of designer Perfume (HINT, your Husband/Wife-to-be will be REALLY impressed with such a present to open on your Wedding Day!)

Much of the time it can be really awkward to find enough light during Prep as there often just isn’t anywhere suitable, and because very small items need Macro lenses which also need LOTS of light. Hence bringing additional lighting in the form of a Video-light can be the perfect solution

My GODOX LED 6R RGB Video-light review is in light (pun) of how I’ll use it as a Wedding Photographer for still images, rather than for video work

First off – what’s in the box?

Simple – the light unit itself, which is a mere 77 x 66 x 30mm and weighs-in at just 110g, a Diffuser, a short Type-C USB cable and a Manual (though its so simple this isn’t really needed)

From my point-of-view for Weddings, the most useful features are the range of Kelvin based White-Balance (3200k – 6600k in 100k increments), and obviously the Power adjustment (0-100% in 1% increments)

SPOILER ALERT – this little light is brilliant (yep another pun). I used it for close to an hour while getting to know it and for these example photos below, during which time I only needed it at 50% Power and after an hour both showed 66% charge remaining; so its unlikely to ever run out in a day’s shoot 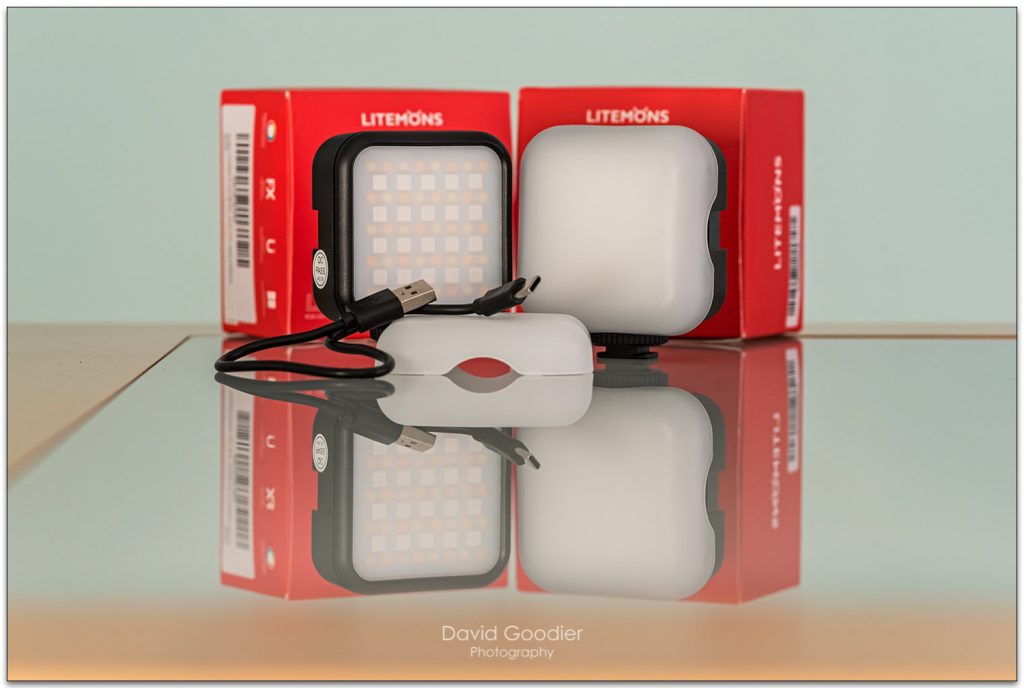 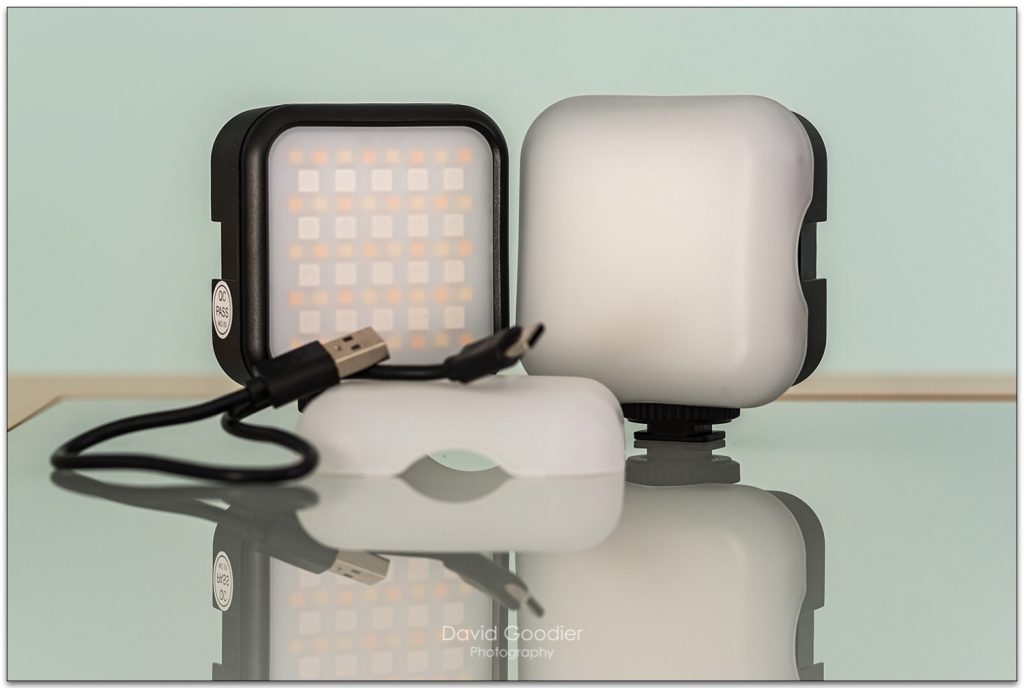 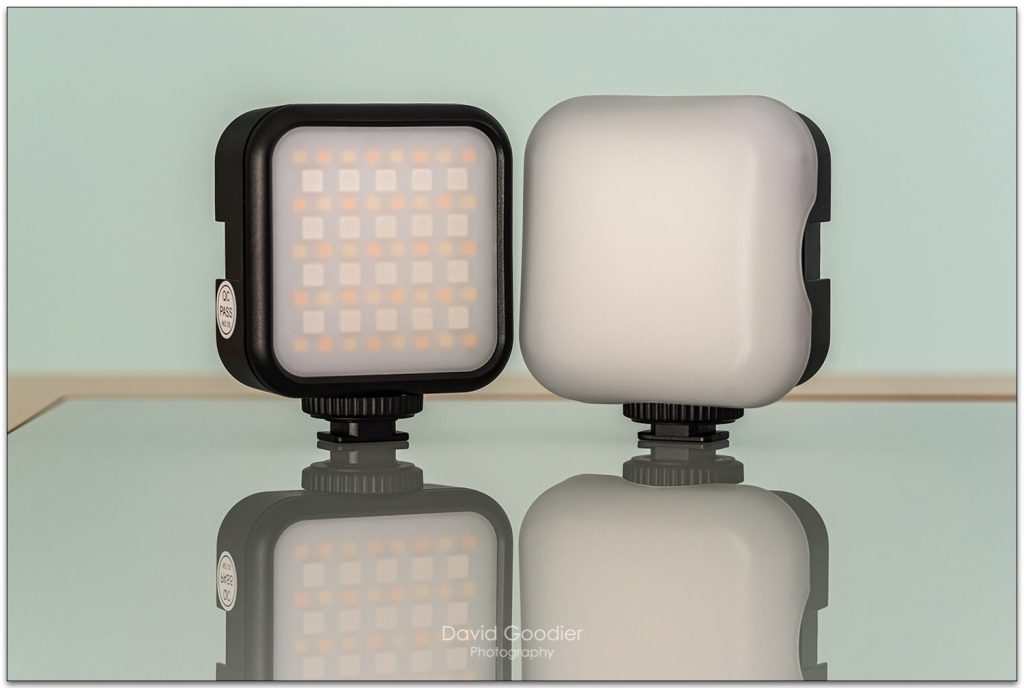 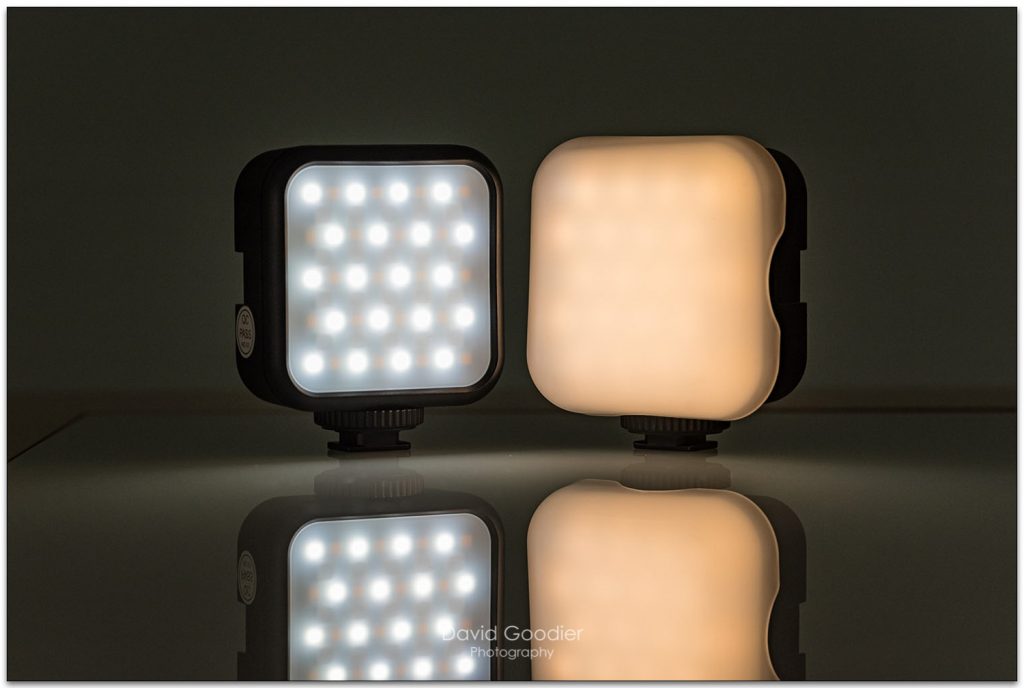 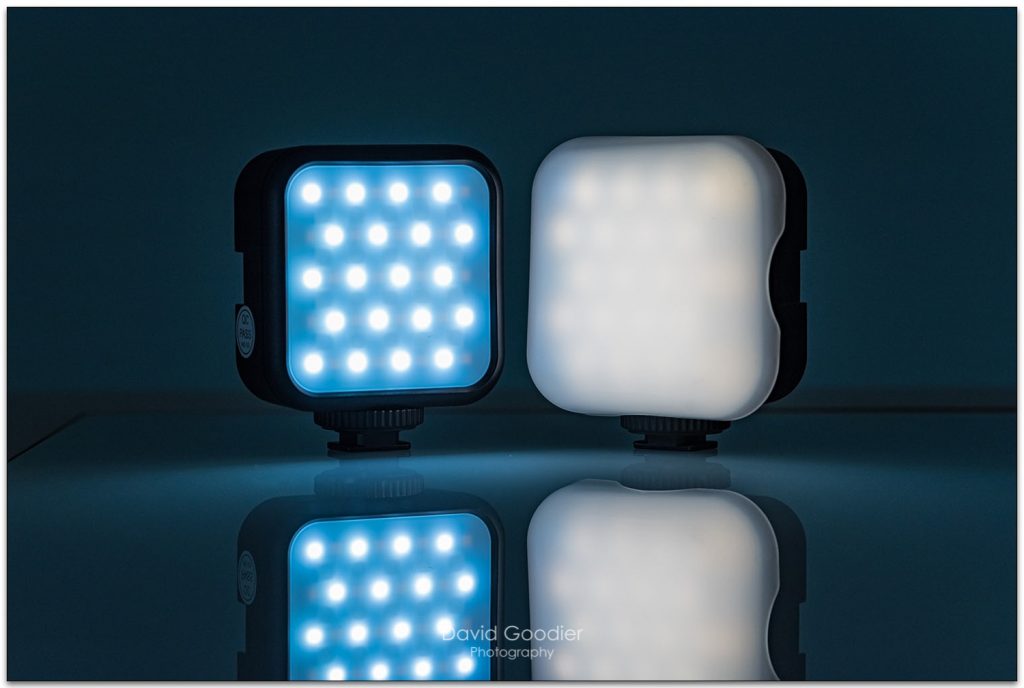 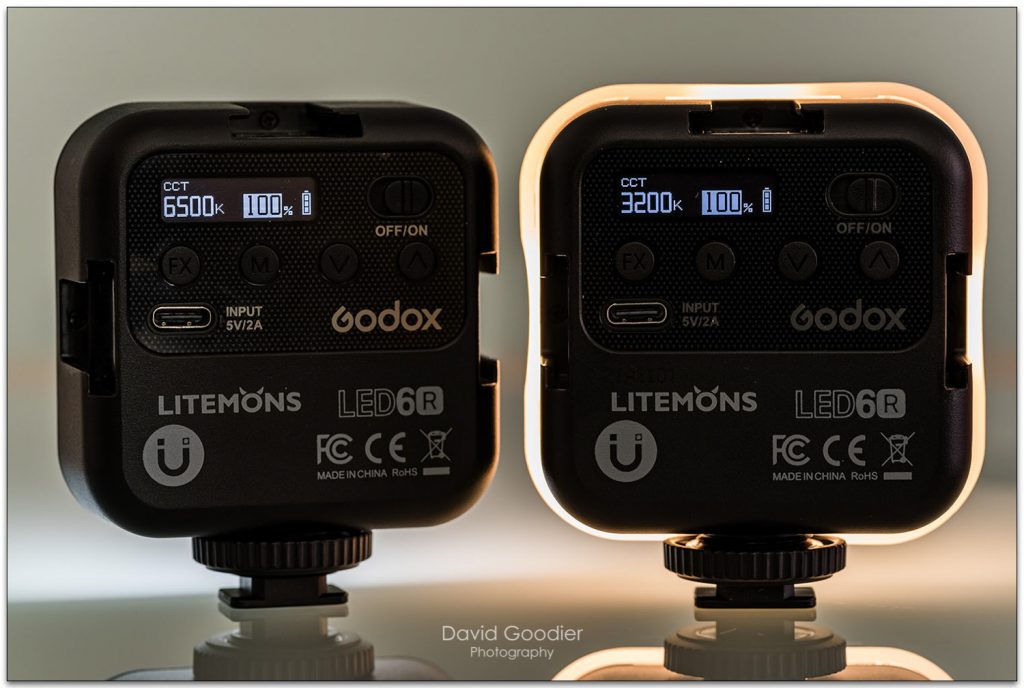 So how do I see these lights being used at a typical Wedding Prep?

Having just one I suspect I’d typically use it above, behind or off to one side, and I’d decide on the White Balance to either complement or contrast the ambient light source

Having two though gives a much wider range of options both from cross-lighting, and for deliberately mixing different White Balance values to create colour contrast

But these lights have a further ‘trick’ too, in that you can set the Hue value from 0-360 degrees, meaning you can use one (for example) to light a background in Reg, Green, Blue or pretty much any shade in-between while the other actually lights the subject

In the following examples I started by just using one light, but underneath the subject as I was able to light through a glass table. I also cross-lit with a second light, and sometimes at a different White Balance too to accentuate the label of one of the bottles of perfume while contrasting with the other

And finally I lit the Lalique Bear figurine using the Hue feature with one set to a strong Red, and the other a strong Blue, finally using both at the same time 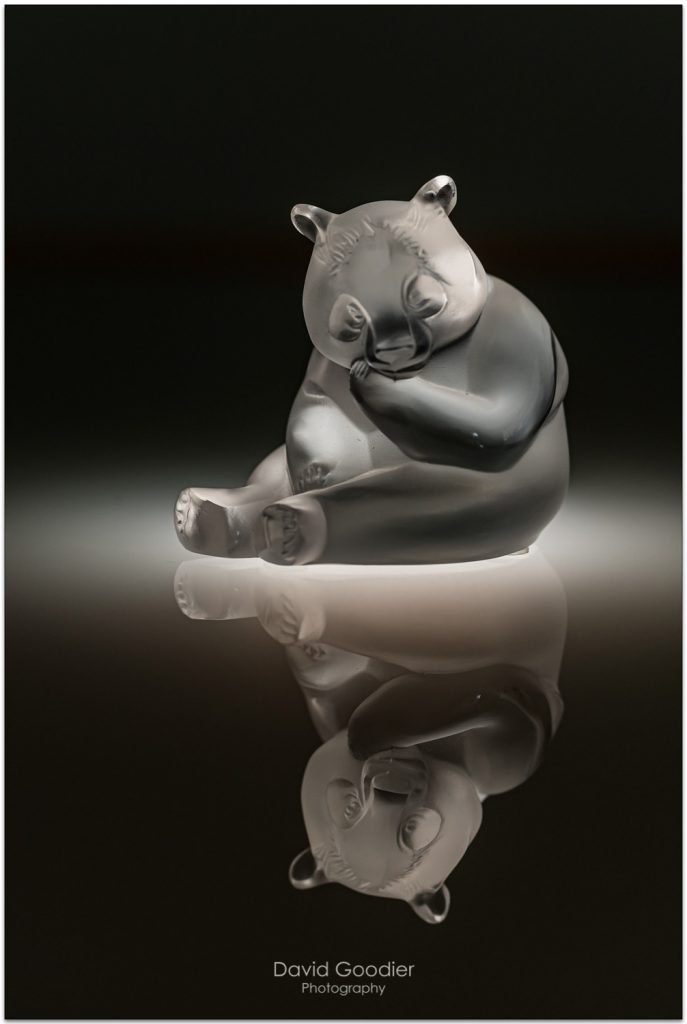 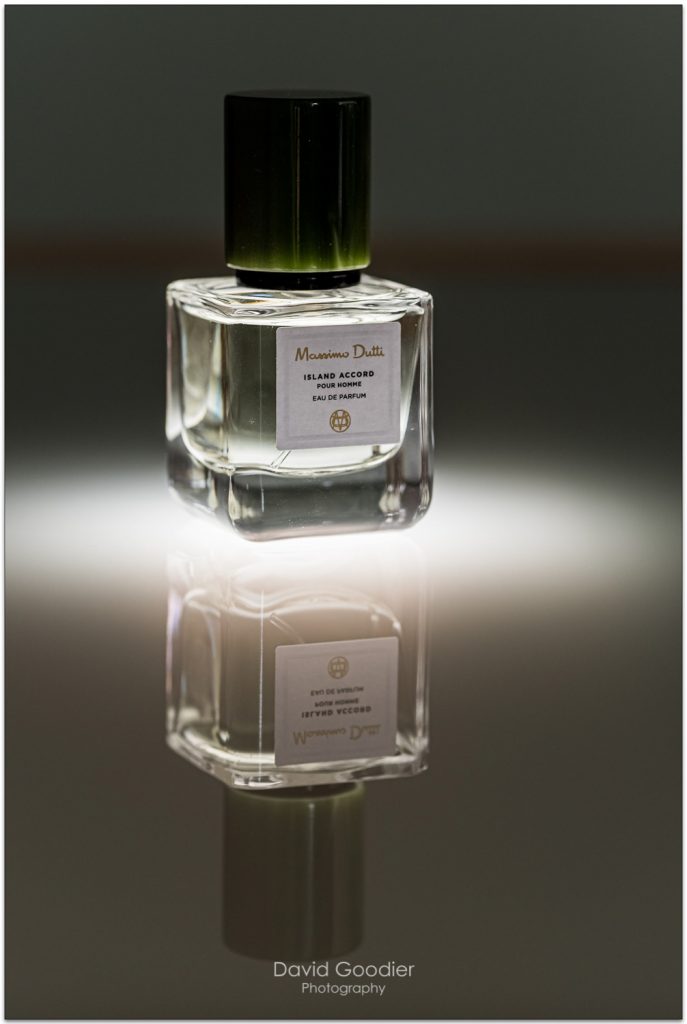 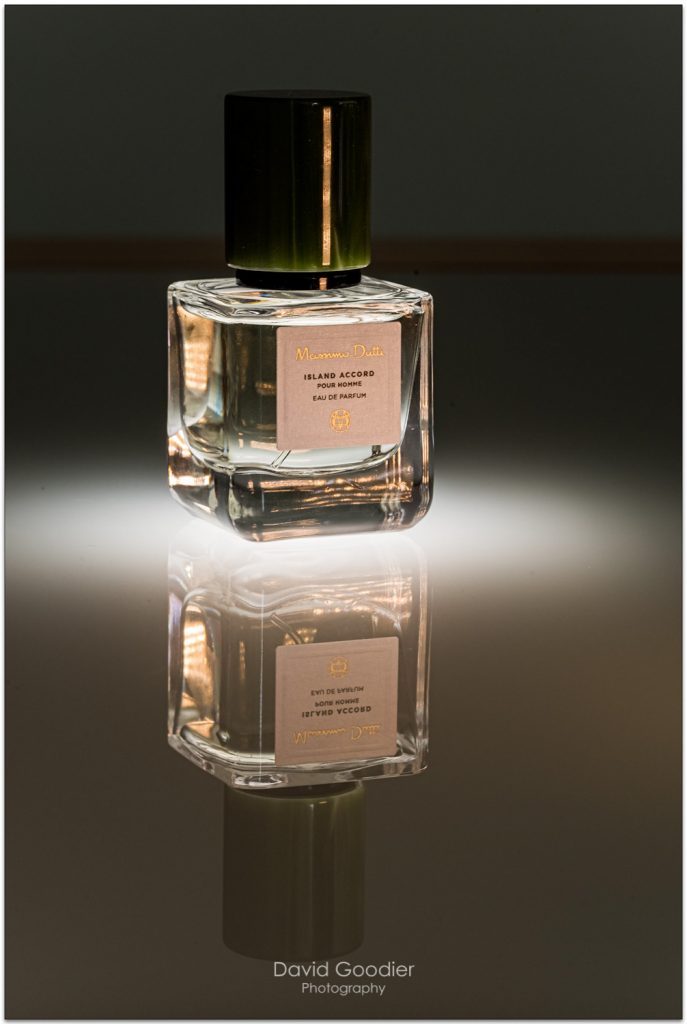 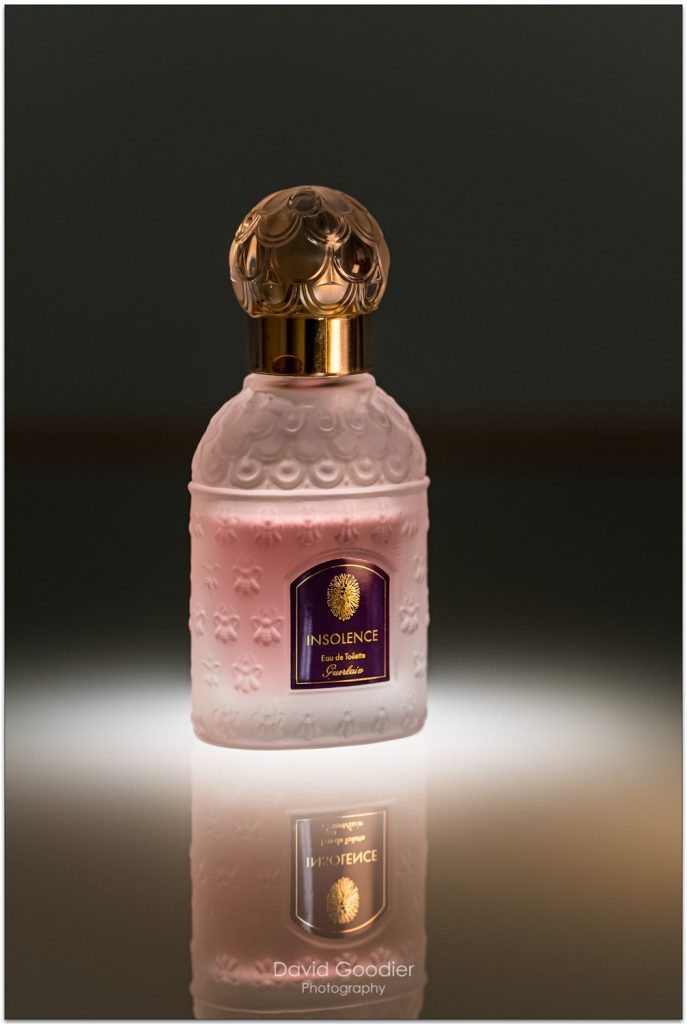 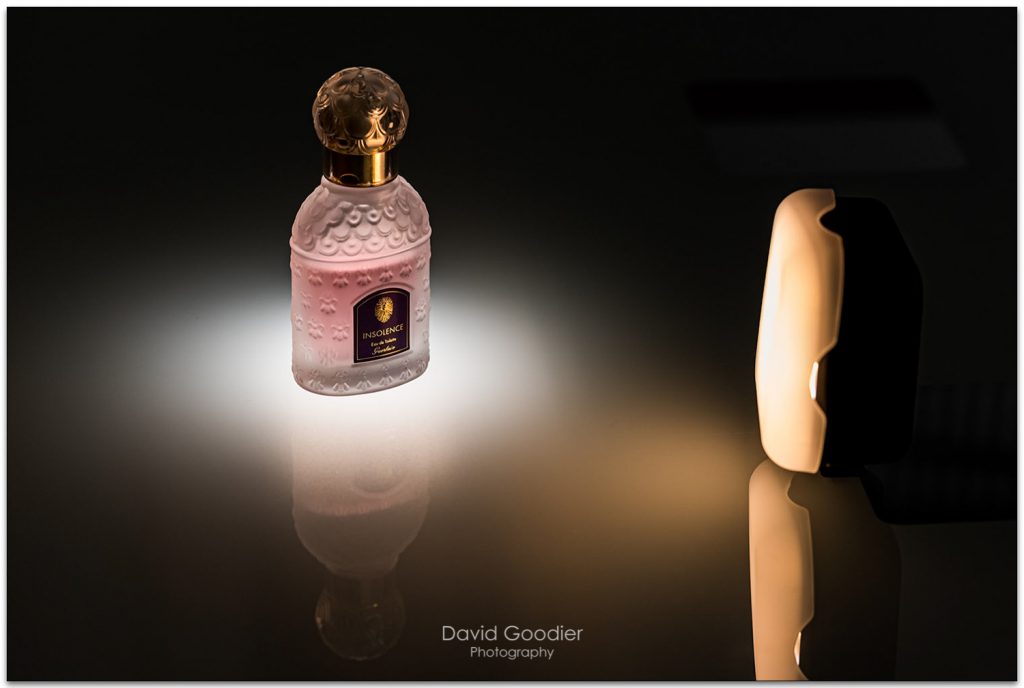 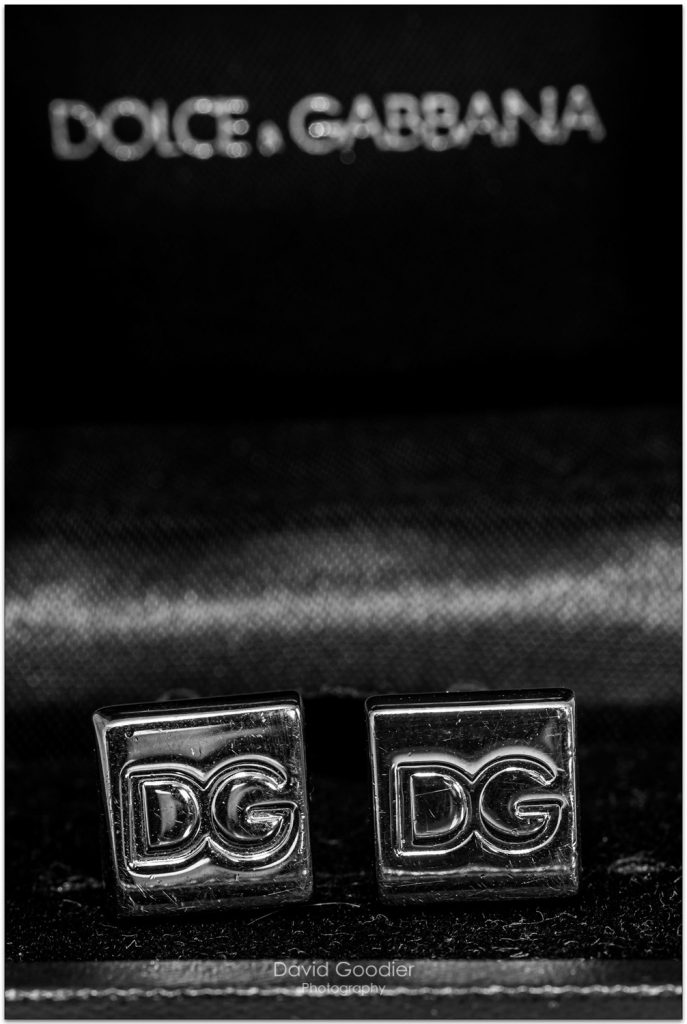 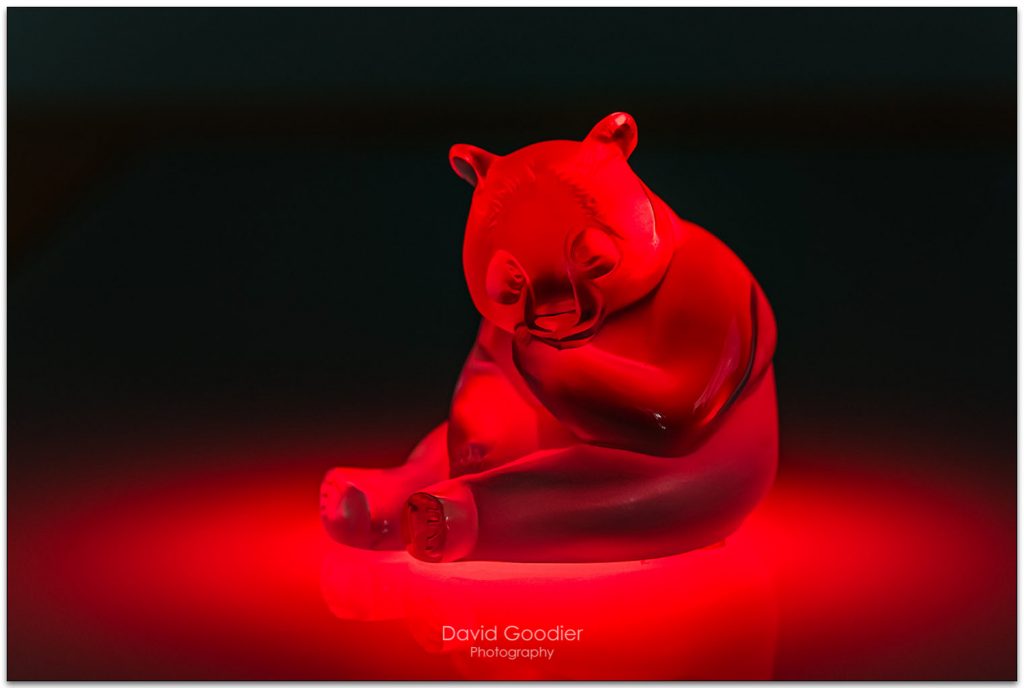 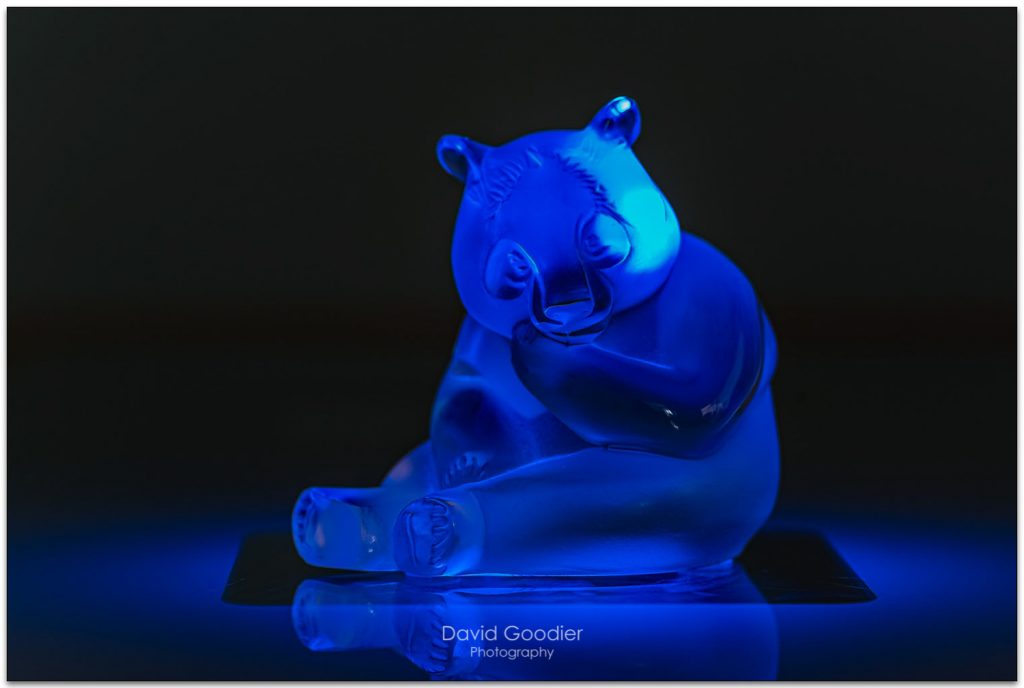 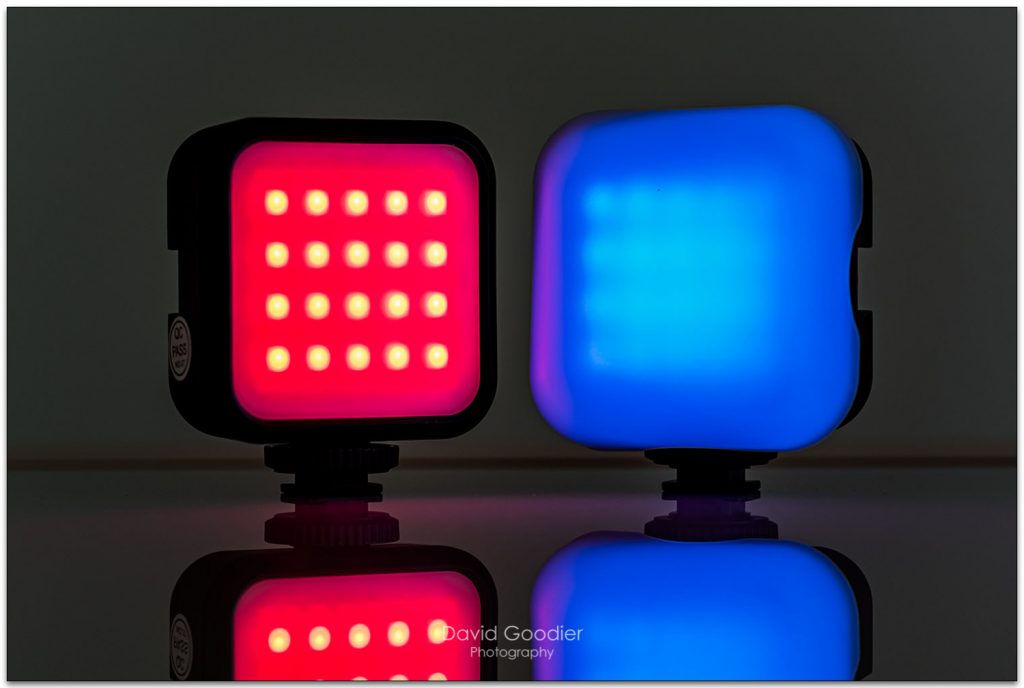 1 – they are Magnetic, and will stick to any iron-based metal such as radiators, most light-stands, cars, etc.

While this isn’t immediately of benefit to a Lake District Wedding Photographer like me – well I’ve not yet had a Bride with an under-wired Bra big enough for them to hang from !!! – I can see it being handy when sorting out Off-Camera Flash (OCF) gear in the boot for an evening’s shoot, where the  GODOX LED 6R will simply attach magnetically to the car’s bootlid and illuminate the whole boot area = handy 🙂

2 – they have 13 FX settings. Apparently, this is quite common to video-lights, but various flashing sequences (which includes fades through all colours, and sending out SOS signals!) aren’t particularly useful to me

I did try the Police and Ambulance Emergency Flashing Lights sets though, with both of my lights magnetically attached to the front of my car, and it does speed up travel through traffic at night !!! 😀

3 – they have three Cold-shoe mounts on them too, meaning you can attach additional lights to each other to create a column or panel of them, or perhaps videographers could attach a microphone to them. I’m sure that’s handy for some 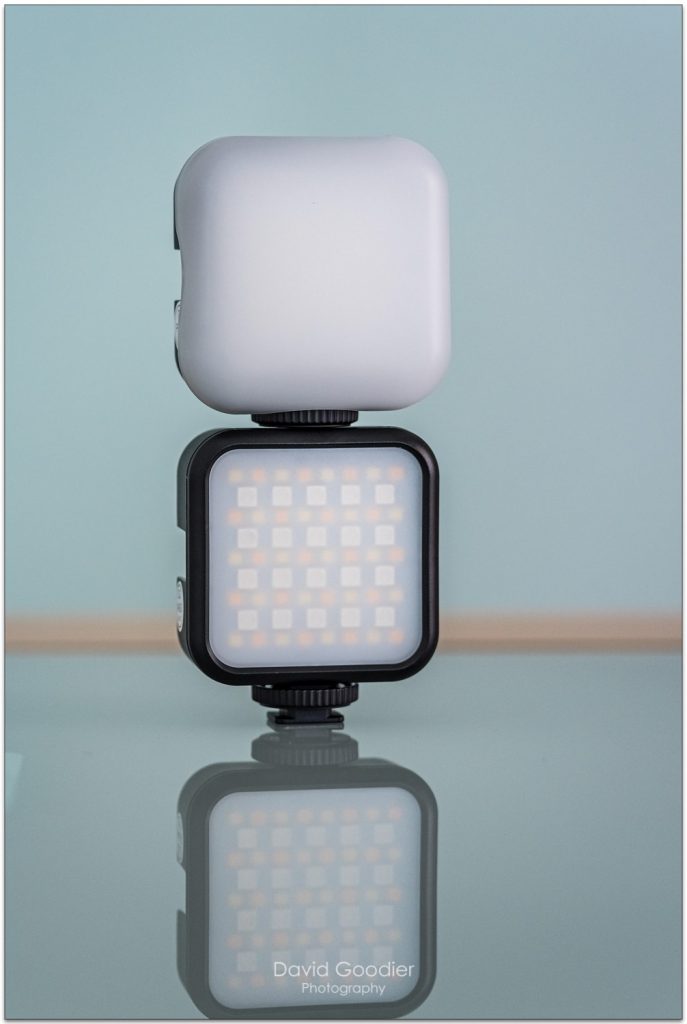 So is a GODOX LED 6R RGB Video-light worth adding to the already extensive equipment list carried by my most Wedding Photographers?

These great little lights have bags of power, versatility and range and will add both ease & creativity to my options for shooting details during Prep

I may well also try them on-camera, or on my Lastolite L-bracket, set to a lowish power to add a catchlight for such as 1st Dance and Sparkler shots after dark; where they may well add enough extra light to assist the camera’s focusing too – win win

Should YOU buy one? 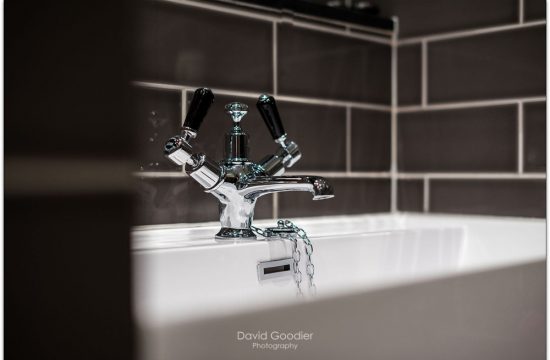 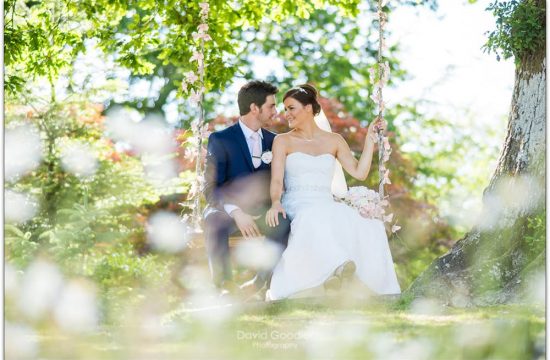 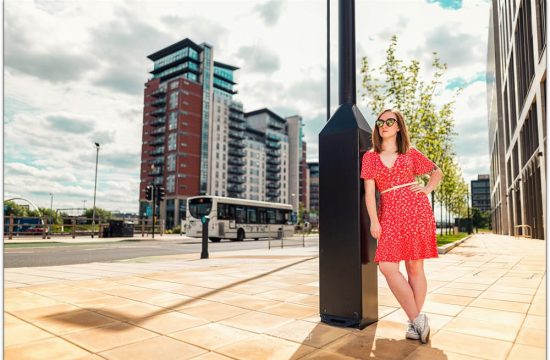